If you are reading this blog post, you already know the difficulties of scheduling your production purely with standard Microsoft Dynamics NAV and Dynamics 365 Business Central. Working on a proper schedule is so difficult. Typically, you get lost in all these open tables that are required to get all information needed. Let’s not forget to mention the difficulties to understand the grand scheme of things when you change data. Not to speak of getting this bigger picture by comparing the impact of data changes. The fact that many NAV and Business Central users regard this task as very tedious was, by the way, confirmed by the data that comes from our State of Business Central & Manufacturing Report.

A short intro into production scheduling goals and options

We at NETRONIC are all about operational agility. A proven (if not: the most rewarding) technique to achieve operational agility is visual scheduling. Back in 2012, we realized missing production scheduling capabilities within Microsoft Dynamics NAV and decided to close this gap. We wanted to give manufacturing users of Dynamics NAV the option to visually manage their production schedule. Consequently, we released our first product for NAV in 2013: the Visual Production Scheduler (VPS) for Dynamics NAV.

And by the way: We still maintain the VPS for Dynamics (for all role-tailored client versions, still!). The VPS provides customers with a high-level view of their production orders, routings, and work & machine centers. It achieves an unprecedented way to achieve transparency of the production schedule. This transparency comes from visualization, which allows at the same time to sophisticate (many information) and to simplify (all in one picture). As such, the VPS gives manufacturing customers the ability to see their data side by side, making it easier to make comparisons, assumptions, and decisions.

Executing these decisions based on visual data can be done easily, using our drag and drop functionality – which until today serves as one of our most beloved and important features. 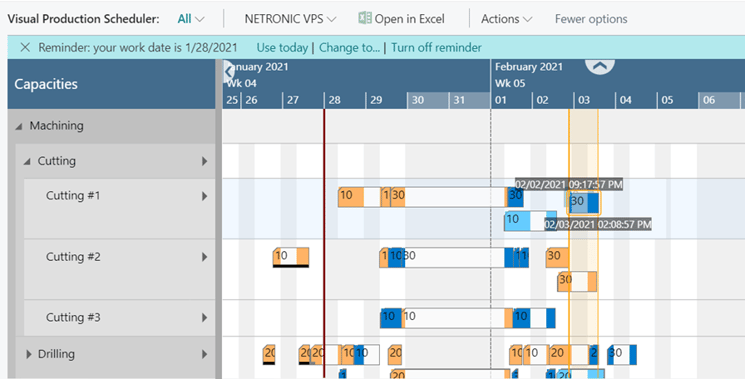 However, we did not stop with the VPS for NAV. Firstly, we have been developing an enhanced version of the Visual Production Scheduler for Dynamics 365 Business Central. Secondly, we decided to develop a "bigger brother" to the pure drag & drop visual scheduler: the Visual Advanced Production Scheduler (VAPS) is the first finite capacity scheduling extension for Dynamics 365 Business Central and adds automatic scheduling to the plate.

Our products allow the user to visually make changes to their production schedule. This is done by dragging & dropping operations. On standard Business Central, without a visual scheduler, this takes a lot more effort. Users have to drill into individual tables and change values (dates and times) manually without seeing the bigger picture.

The basic principles of our drag and drop scheduling include the following:

Our standard drag & drop scheduling is different. By default, it treats the operation individually and does not cause any rescheduling of any other operation. With this, users have full control of what is happening.

However, we also allow the VPS to mirror the standard Dynamics NAV / 365 Business Central behavior. But, we do this a bit more focused.

With these options, users not only have more control of their operations and hence their schedule. They also can create gaps between operations from one production order - which they can't with standard Dynamics 365 Business Central.

Nevertheless, there is one relevant gap - both in the standard Dynamics system and in our drag & drop scheduler (Visual Production Scheduler) which mirrors this system. Dynamics NAV and Dynamics 365 Business Central are good for time scheduling, but they are not good when it comes to capacity scheduling. This system does not come with any reasonable kind of finite capacity scheduling.

As logic as "applying rules" sounds, as impactful it is for the drag and drop scheduling. Applying rules means more formalism and fewer degrees of freedom. Drag and drop with a finite capacity scheduling engine still come with the two general drag directions (horizontal and vertical), however, the drop fundamentally changes. With the "drop", the user tells the system: "I want this operation to be positioned here". As now finite capacities are applied, this also means: if I position this operation here, the operation that was here before needs to get moved out.

Having this in mind, we enriched the finite capacity drag & drop scheduler with two functions:

With having a finite capacity scheduling engine in place, we also could start to implement automatic scheduling complementing the drag & drop scheduling.

When we designed our automatic scheduling system, we decided to optimize for trust (instead of optimizing for algorithmic sophistication). We wanted to build a visual scheduling software that Business Central would understand and hence would trust.

Consequently, we decided against the magic "optimize everything now" button. Instead, we developed multiple scheduling instruments.

Bulk scheduling (under the schedule tab)

Closing recommendation: "the winner takes it all"

In our view, and also based on our experience of more than 500 visual production scheduling implementations, the decision should not be either/or. Instead, we recommend going for a both/and approach.

Want to take a deeper dive into the VAPS?