What's new in the VPS? Release 1.11 for Business Central

Fresh out the oven! We just released version 1.11 of Visual Production Scheduler (VPS) on Business Central. This new version is available on-prem and can also be downloaded from AppSource for cloud customers. The new version brings a lot of new functionalities to the visual drag & drop production scheduler for Microsoft Dynamics 365 Business Central.

With the continuous enhancement of our products, this time we introduce new scheduling logic for the VPS that enables it to consider the queue time when scheduling.

Setting a queue can be done on the machine/work center time.

This time has no impact on the load of a work/machine center. The queue time acts as a buffer time between an operation and its successor so that you create a gap between the end time and the start time of two consecutive operations.

On the example below you can clearly see the queue time acting as a buffer between the two operations.

The VPS setup dialog has also been enhanced accordingly so that you can decide whether to consider the queue time or not. 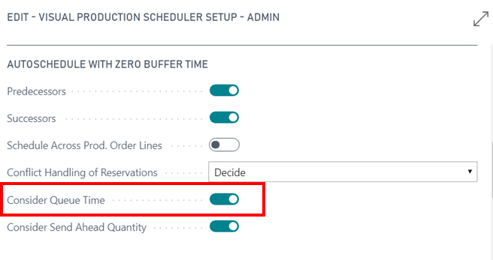 We have been listening to our customer’s demands, and we are proud to announce the fact that we now can consider send-ahead quantities on the VPS.

This means that instead of an operation to finish a whole batch, it can send smaller quantities of that batch on to the next operation, allowing the succeeding operation to start earlier. This reduces the overall runtime of the production order line because the operations then start to overlap. The successor does not have to wait until the predecessor finishes and hence has no idle time.

This option can be activated on the VPS setup dialog 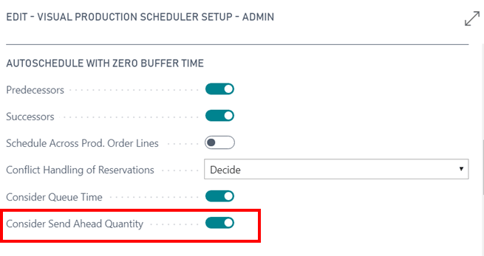 As mentioned in our previous update (last April), we have now extended the VPS with an API, where customers/ partners can change specific behavior of the app via an extension. It is a very powerful functionality that we continue to enhance.

In this update we introduce OnBeforeTransfer events. These events can be used to modify Business Central data before transferring them into our simulation data. This way, the VPS can now support custom flow fields (dynamically calculated fields that are normally introduced by the Microsoft partners). Flow fields can now be shown either on the Text Tooltips or on the Bar Label

Another API enhancement that we introduce is the ability to customize the production order due date line. Through the API you can customize the color, thickness, and description color. The event will be thrown in the load/reload phase of the VPS. If the event is not handled, the standard appearance will be applied.

We removed automatically generated translations. They got exchanged by manually created proper translations in English and German. For partners wanting to create their own language translations, we provide the English .xlf files as basis.

If you want to learn more about these updates in detail as well as our bug fixes, check out our release notes