Two weeks ago, I started my series of blogs about the new version (5.1) of VARCHART XGantt by describing the new graphical features of our Gantt chart control. The release notes of this new version can be found here.

Here comes #2 of my series, where I'd like to give you some insights about what we've come up with concerning the snap tools making positioning objects easier.

Since version XGantt 5.0 you can define so-called “snap targets” for nodes (or their layers), date lines, line grids and calendar grids. That means that these objects define certain places at themselves serving as targets of a “snap action” of other objects. When moving a node horizontally or modifying the size of a node or a layer, start or end date of this node or layer will be chronologically adjusted to the defined snap tools of the other objects. The start or end date will move towards the snap target within 5 pixels next to it thus taking over the exact date of the target.

Snap tools up to now: Automatically applied individual behavior for each node layout

In XGantt 5.0, special behaviors were applied automatically depending on the node layout (ungrouped, grouped, hierarchical arrangement; given that the according objects define snap tools):

In addition to the above described automatical selection of nodes, Version 5.1 of our Gantt control now lets you manually select nodes.

For switching between the two selection modes a new property was added:

VcGantt.SnapTargetNodesSelectionMode which can be set at the API or in the Properties window and comes with the following values:

When the corresponding boxes have been ticked, a node that is being moved or resized, will snap to snap targets, that, if these were defined at nodes or layers, weren’t sufficiently visible up to now. So we came up with two options to better recognize the defined snap targets:

The illustration below shows the possible options for snapping node 4054 to the start date of node 4056: 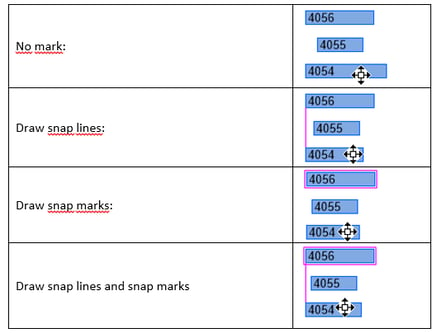 Both markings are only visible during the interaction. The layout options of both snap lines and snap marks currently can’t be modified.

The corresponding checkboxes for activating snap lines and snap marks can be found on the Nodes property page. 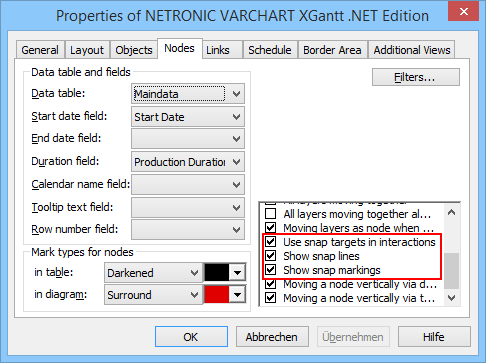 You have to tick the checkbox Use snap targets in interactions to be able to mark snap targets at all. Ticking/not ticking the other two checkboxes specifies the visualization of the snap targets.

You can also set these properties at the API, the data type being Boolean:

Now try by yourself. If you do not use VARCHART XGantt so far, feel free to download a trial version. This version comes with full functionality, and we are happy to provide you with free tech support during your 30-days trial period.

Want to refresh your knowledge about snap tools in VARCHART XGantt? Read our blogpost on how to position nodes in Gantt charts with a snap.