A few weeks ago, Martin hosted the webinar "Capable-to-promise and production scheduling (a provocative view)". In this blog, he shared some ideas on how make-to-order manufacturers can give realistic delivery dates to their customers. He suggested a somewhat surprising mix of tools to achieve this. With this mix of tools (capable-to-promise, capacity-constrained resources, and the Visual Advanced Production Scheduler), Martin manages to leverage the strengths of each tool, while having one tool fix the weakness of the other.

Read this blog to get a written recap of the webinar.  I also include the recording of the webinar and provide links to the respective minute of the presentation.

After some preliminary words, Martin introduced his topic by stating that the two functions "capable-to-promise" and "capacity-constrained resources" provided by standard Business Central for manufacturing would be really great if they were implemented in a better way and that due to their weaknesses many experts actually recommend not to use them.

He then announced - somewhat daring - that he had come up with some ideas of how to combine the two functions with "the right glue" in the form of yet another tool so that at least make-to-order customers could really benefit from them. 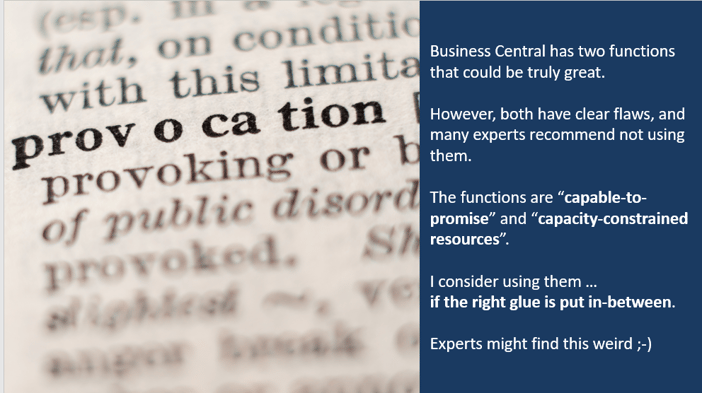 Based on the characteristics that define make-to-order manufacturers (see picture below), Martin showed that for this manufacturing type the keeping of delivery times is crucial and hence more important than the resource utilization. At the same time, however, their highly volatile processes make it very difficult to give their customers reliable delivery dates.

As Martin stated, the capable-to-promise function is made exactly for the purpose of giving a delivery date for a sales order (you don't even need a production order). He underlined his statement with a description taken from the Microsoft documentation. According to this, the function has the following characteristics:

Martin then showed the capable-to-promise function in action by a very simple example that he visualized in the Visual Production Scheduler (VPS), the drag & drop frontend to standard Business Central manufacturing. He created two sales orders for the same item at around the same time, had the capable-to-promise function calculate the delivery dates, and created two according production orders with the plannning worksheet. The result shows an overload at the drilling machine which is due to the fact that standard Business Central plans with infinity capacity:

Due to the fact that the capable-to-promise function in general plans with infinite capacity, users get unrealistic delivery dates from it.

As Martin went on, Business Central actually offers the capability to plan with finite capacity and that is by using capacity-constrained resources as is defined in the Microsoft documentation:

Great as the above-described capabilities might sound, the fact that the function in some cases leads to splitting operations can also be a great weakness which Martin illustrated by the same example as described above, but this time defining a capacity-constrained machine center. Other than in the first example, this time there is no overload, but at a closer look one recognizes that Business Central has split the two operations:

So we get realistic delivery dates here but the plan is in no way actionable, because which planner would set up a machine, keeps it running a bit, then stop it and set up the machine for another operation, and so on and so forth?

The glue between the two functions: a tool planning with finite capacity but not splitting operations [min 35:24]

Referring to his last webinar "How to win the battle between production planning and scheduling" where he pointed out the importance of using the right tool for the right purpose, Martin again highly recommended using an appropriate tool also for creating a both realistic and actionable schedule.

In the live demo he showed how the Visual Advanced Production Scheduler (VAPS)  (the first finite capacity scheduler fully integrated into Business Central) can help overcome the shortcomings of Business Central.

He started with the well-known two orders example and showed how the VAPS together with the two BC functions gives realistic delivery times AND creates an actionable schedule with unsplit operations:

Then he moved forward from the super simple data set and proved that the VAPS is also capable of managing more realistic and complex data:

Martin concluded the webinar with some words of caution: 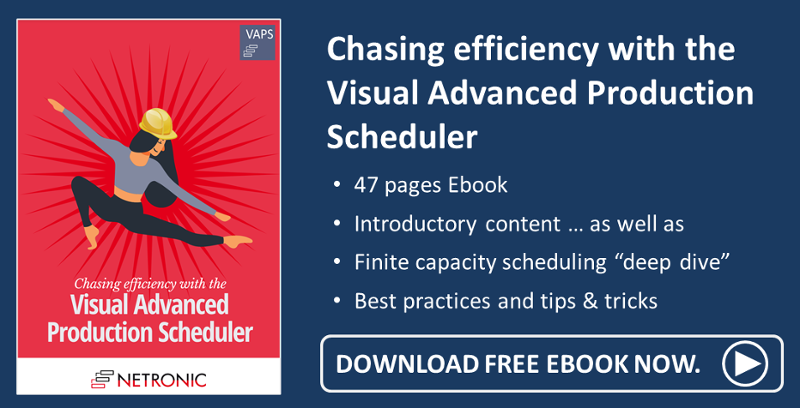