The Visual Service Scheduler (VSS) is a dispatch board for Microsoft Dynamics NAV Service Module allowing to easily plan and control service orders. It is designed as add-in and as such directly accesses the standard NAV data. Since the resources table is also used by Jobs and Assembly orders, it would certainly be useful to display resource allocations coming from these areas also in the VSS. This is why the VSS offers an option to show double allocations.

In some companies, resources are used in several areas and therefore are managed by different NAV modules at the same time. The resource Mary could be scheduled by a job order and at the same time in a service order. To avoid a double allocation in the VSS, the user can decide to display the resource allocations of the Jobs and/or Assembly Module in the overview.

There are two ways of highlighting double allocations, differing in color. A resource appears in red if it is completely allocated by one or both modules whereas grey is used to show that the resource is already partly assigned. 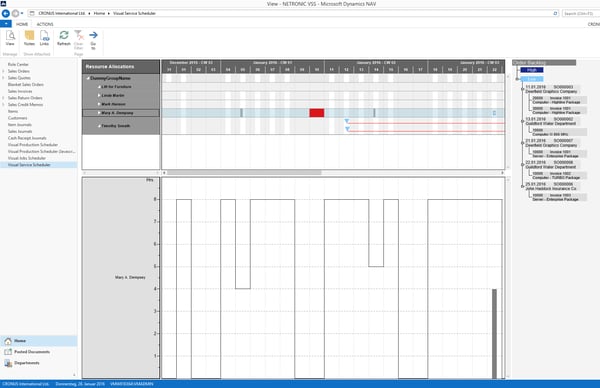 In addition, a tooltip shows the number of hours already taken of this resource (Mary) by - in this example- the Jobs module.

The reduced capacity of the resource is of course also shown in the capacity view. 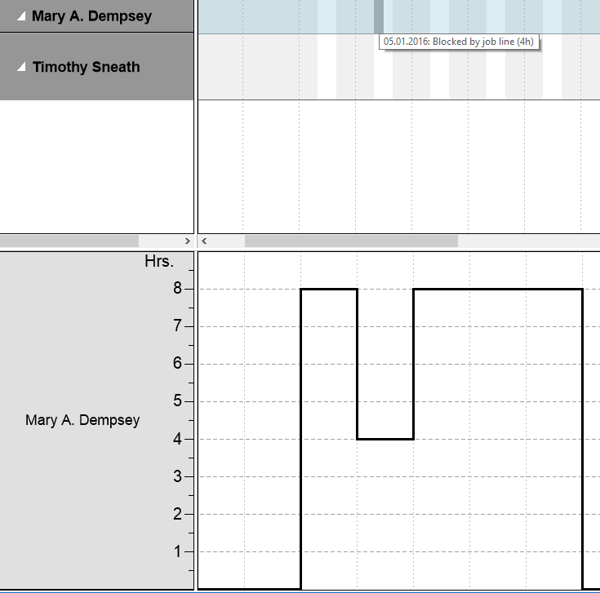 As already mentioned above, the VSS uses the resources table also used by Jobs and Assembly. To display the service orders, the VSS uses the module-specific allocation table in NAV. If impending double allocations are to be displayed in the VSS, the user has to select Show Job Allocation and/or Show Assembly Allocations in the Setup dialog. The corresponding allocations will be shown in the Gantt area and be taken into account for calculating the resource capacity in the histogram area.

If you want to see the VSS in action, contact us. We will be very happy to demonstrate its functionality in an online-meeting.